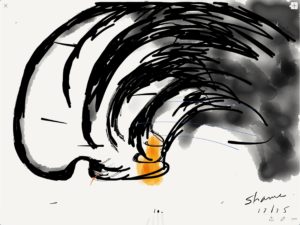 Before I heard the calling to become a Natural Dreamwork practitioner my professional world involved taking meticulous care of patients, always monitoring their comfort as I worked with exacting precision inside the mouth, inside the tooth, every aspect of my work tightly focused to provide the patient with the best care possible. While perfectionism as a trait made me very good at what I did, it was also exhausting because true perfectionism means that perfect is never achieved. I chose to work toward becoming board certified in my profession, also an exhaustive process, to prove to myself that if I attained this highest level of achievement, then I’d believe, and know that finally, I was good enough. I went through three different kinds of exams over a few years and after a few weeks of holding my breath received the congratulatory letter. My first reaction was expecting a second letter saying the examiners were mistaken. That never happened but the inner certainty remained that still, I wasn’t good enough. That led me to seek counseling and when after several years that belief hadn’t changed I began working with dreams and my mentor. I didn’t realize then that what I was seeking was relief from the unworthiness of shame.

When I look over dreams from early in my exploration through Natural Dreamwork I’m amazed how often shame appeared as a reaction in the dreams. Shame about missing meetings, violating the rigidity of inner rules, shame about my perception of my own incompetency. Over and over the shame of believing I would disappoint, not measure up to expectations; a belief of not being enough because of the demands of perfectionism. I had repeated dreams of shame around the fear of speaking up, shame over talking about my pain, shame because of fear of criticism, shame about becoming angry.  Through the dreams my awareness grew that I was paralyzed by it; a dream of losing my purse and terrified to tell my mother. And even when the purse was exactly where I left it and untouched, the terror remained, shame about ‘what if’. I had lots of dreams about being late to the airport and shame about maybe missing the flight; shaming myself before anything bad even happened. Perfectionism arises from shame and supports a belief in our essential unworthiness because a failed perfectionist is the only kind that exists. I began to know how I saw all of life as a test I would inevitably fail.

I could talk about shame and define it but didn’t recognize it at a cellular level. And then I had a dream where a look from my teacher felt like criticism and I was overcome with a full body experience of shame. It took feeling my dreams come alive within me before I actually felt physiologically what a full body shame attack was, and suddenly knew how much shame had controlled all aspects of my life and my psyche. Then I immediately became ashamed of my shame, which is more toxic than the shame itself. Dream after dream of shame around sexuality, even the sensuality of allowing my senses to embrace the beauty and tenderness in the world. Shame was a slimy coating that oozed over everything in my world. Everything. I could feel a wall around my heart from years of hurt and pain.

And then a shift began in the dreams. Deep feelings began to appear; need, pain, joy, fear, anger, how afraid I had been of connection, vulnerability, fear of being hurt. I began to feel a response to the sensual, my senses; enjoying touch rather fearing it, absorbing the intensity of colors in the world, the richness of smell and taste interwoven, a symphony of the sounds around me.

Finally I was learning that I didn’t have to believe the voice in my head that assured me how broken I was. After years of experiencing dreams in session and how they reflect the beliefs that color waking life I can still experience shame, but now know more about how it used to be the only filter I had for life. What I can feel into now is the finer mesh of that filter and have become aware of how even very small things in my life can create shame. The gift of this allows me to notice and breathe into a new awareness that while shame oozes in to even small cracks and crevices of life experiences I can step away from it and gently reframe the story without the shame.

A recent dream had me standing naked in a doorway listening to a bully. That bully was the voice in my head that shamed me throughout my life; a cruel, vicious voice that kept me crouched in a corner of my mind, hiding from life. In this dream I was able to confront him, be compassionate, turn and walk away.

The journey through my dreams and the guidance of my teachers both within the dreams and in waking life has exposed and diminished the shame of the shame and my compassion for myself and others has increased. I’ve learned that waking life is also a journey rather than a test, which allows me to slow down, enjoy, and experience the dreams and waking world through my senses.

Artwork: The drawing is how I expressed my horror and anguish when I discovered how overwhelmed and controlled I was by shame. My lens onto the world was completely colored by it.

Leigh works with clients in person, through phone and Skype. For more information you can contact her at: JourneywithLeigh@aol.com   Her website is http://dreamjourneywithleigh.com