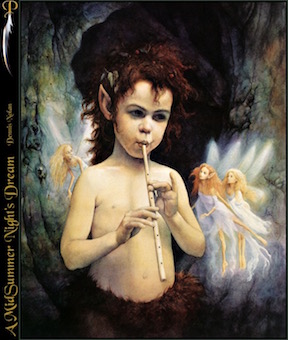 Are fairies real? Personally I don’t imagine seeing little elves or fairies in the woodlands, as people did in England for centuries…as Shakespeare portrays them gloriously with Puck and Oberon and Titania and their gang in A Midsummer Night’s Dream… What I would say is: in order for there to be fairies people must imagine there are fairies. Generally they must belong to a culture and society that share a common imagination of them, before they can be seen. Fairies only appear to those who have an imagination of them. The same might be said of gods and goddesses, and of God. The imagination is an essential medium for the sacred to emerge, for the magical to emerge, for the transformative to become apparent in all of its lights and colors. Without imagination there is no faith of any kind, because both faith and imagination are of unseen things.

I once interviewed a monk who was born in old Tibet, Tibet before the invasion of China. I asked him about the wildlife he knew as a child. He said, There were rabbits, and bears, and yetis and wolves and… I said wait a minute, what did you say? He said, rabbits and bears and yetis… I said yetis? Yes, there were yetis. If you got too close he would tear your face off. He had seen them.

To see yetis you must live in a culture that imagines yetis. I don’t think otherwise you can see them.

One time I was in Guatemala, this was in 1973. I was in a village on Lake Atitlan, and I met a man who was an engineer. He wore a tan outfit and glasses. He told me that every Thursday a brujo took over his body. He was now in the village looking for this brujo. I was struck at how rational he was, how methodical. He had a practical problem to solve: these disappearing Thursdays were interfering with his work. He was an accountant or an engineer, worked in a bureaucracy in Guatemala City. I went with him as he asked the villagers about the brujo. Oh yes one said, he is about this tall– maybe four feet, and he flies all around that mountain. I have seen him…He showed us with his hands how the brujo flies all about.

To me these stories suggest that certain events take place in the imagination. Such also are the ‘events’ in dreams. That does not make them less real. They are real in their domain, have real effects and real causes. They become facts in the imagination, just as there are facts in the waking world. In some ways these events are “more” real in the sense that they underlie feelings and attitudes, and direct behaviors– if unseen then in unseen ways, but if seen, confronted, felt deeply– then in ways that give us greater insight and the possibility of changing our lives.

In their pure form in dreams where they are sensed: tasted, smelled, touched, seen, heard and weighed– we know them so vividly, so deeply. We begin to understand the powers of the imagination, how the imagination mediates between the sensual and the spiritual, and gives to “airy nothing a habitation and a name” as Shakespeare has Theseus say in A Midsummer Night’s Dream. That is what imagination does– in waking life and in our dreams. And it is not an antonym to “real”.. the imagination also has its reality.. very deeply so, and the confusion about that, the common confusion that what is imagined is “unreal” is the source of much of our difficulty in working with dreams. That is why when Theseus dismisses the experiences of the midsummer’s night as mere fancy, Hyppolyta his bride answers:

But all the story of the night told over,,

And all their minds transfigured so together,

And grows to something of great constancy;

These events in dream– experienced with open eyes and hearts– can lead us to an understanding of love in a much deeper way, of a more universal pervasive love than we have ever imagined. It is a love that gets embodied in our encounters with imagined persons– that is with “imagoes”– who touch us, who speak to us in an uncanny and crypto-poetic ways. They do not speak so much as they utter. And they give us experiences of healing love, whether they come as lovers or teachers or fathers or mothers or friends.

Perhaps previously in our limited experience we confined love to certain particular persons, particular relationships– but here in our dreams is a love that comes from a transhuman source. Here are also images that themselves are like mirrors of our condition, and have healing powers when they are contemplated.

To get to these experiences we must put aside our habit of making up stories, the ego’s daily bread -in fact the ego’s minute balancing act from moment to moment. We must set to one side the story spinning which is all rooted in the past, to maintain the past— all rooted in conditioning. We must open ourselves to the rich imagination of the dream, the way the dream imagines events for us, presents them to us. If only we can see them as they are and not “suppose”, not turn away, and not flee… Then we are on our way to the deepest encounters the dream offers: the sacred encounter, the transformative encounters. It is all in the imagination, and it is all real. It witnesses more than mere fancy. It “grows to something of great constancy.”

Rodger Kamenetz, founder of Natural Dreamwork, works with clients in a program of spiritual, imaginative and creative development through the contemplation of your dreams. If you are interested in this sort of work, please contact him at thenaturaldream@gmail.com 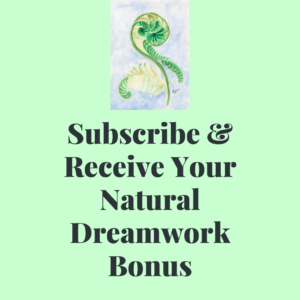